< Previous Entry Next Entry >
In my head lie grand plans of exploring and photographing Australia's remote regions, far north Queensland, outback Western Australia, the deep south of Tasmania and even our many beautiful islands. However the reality is that such places will have to remain the stuff of my dreams for some time to come. I'm anchored by constraints of time, money and responsibility as are, I imagine, most people. So it was that this collection of photos came, as it were, from the extent of my tethers.

First up was a mad dash to the Blue Mountains. I was super excited to get away and had conjured such fanciful images in my mind that I floated through the many hours of driving. My hopes, however, were to be crushed upon discovering the whole park shrouded in low cloud reducing visibility to near zero for the entire trip. Determined to make the best of it, I hiked about the sodden, foggy ranges and eventually came away with the Dance Floor Cave and Kalang Falls shots.

On a whim I spent my final day trying to out drive the rain and ended up at Koolewong to capture the boats at dawn, before the long haul home again.

The next outing proved more successful. With a few days to spare I did a loop, down to Philip Island, up to Falls Creek and home via the Cathedral Ranges. Philip Island was wet, windy and overcast. Having invested some of my precious days I almost gave up in disgust before the isle finally turned on the charm, presenting me with a gorgeous morning at Speke Wreck. Poking around the clifftops in the dark I eventually found the rusted remains and was rewarded with deeply moody light.

Next was Falls Creek, where morning light pierced a heavy fog to create a wonderful atmosphere around Victoria's oldest mountain hut. I felt privileged to witness it, all alone on the waking mountain, knowing how often I'd been up there before only to come away with nothing quite so special. The old gums looked a treat glistening with moisture, and catching the backlit glow.

With only a few hours remaining to me I made a crazy decision to try to capture a shot I'd scouted several years ago. Driving for hours the sun was already low in the sky when I entered the Cathedral Range State Park. The endless dirt tracks confused, turning me in circles with their myriad tentacles.

As the light became golden I managed to find Sugarloaf track and launched up it with what can only be described as wild abandon. It's a dangerous scramble at the best of times. Certainly not something you'd attempt in the wet. I took it at full pace, heavy tripod in one hand, the other scratching for holds whilst my heart thumped.

The wind on the summit was fierce, but the light was blazing orange, illuminating the rock like a beacon. I darted about discarding compositions until one stood head and shoulders above the rest and set up my gear on a precariously exposed finger of rock. I had less than five minutes of good light left, but made use of every last photon with a big grin on my face. I shot through the twilight, but it was those last moments of direct sun that made the image sing.

Descending in the dark was an experience. As mentioned, it's a reasonably difficult scramble. At one point I slid down some rock and reached out randomly to stop my fall. Pain immediately greeted my questing appendage. I yelped loudly and dug one handed through my pack for a torch. The culprit presented itself, a demon in the form of one tiny bull ant defiantly jumped up and down waving its pinchers in an "I'll have you for my dinner you big lummox" kind of way. Who would have thought something so small could cause such pain. My finger swelled to twice its size and remained so for days. 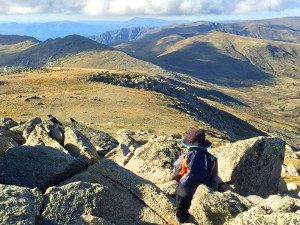 One more adventure occurred, some weeks later. Our little one, now 5, managed to convince us he was ready to take on Australia's highest peak, Mt Kosciuszko. And so it was that the two of us made the journey, on a sunny Easter break. He did, I'm proud to say, very, very well for one so young making the 6.5km up to the summit from Eagles Nest chair lift without me carrying him. We shot some snaps on the top and descended back a little to get out of the wind before setting up camp for the cold night. I put six layers on him, plus the minus 30 degree bag and he slept warm and safe. This was also the first chance we'd had to test our ultralight Sea to Summit sleeping mats, having upgraded from the old "blue foamies" circa some 35 years ago. I have to say they are amazingly comfortable.

Anyway, that's it. Nothing else to report. Home again now and dreaming once more of far flung places I can't afford to visit. Goodnight all.

Shipped from America (US $)

Shipped from Australia & US (AU $)

All images may be purchased for advertising, editorial and web use. See Stock Prices for details.
Michael is also available for Commissioned Photography assignments within Victoria, Australia.
Email michael.boniwell@gmail.com or Phone: 04 3473 0828.